An evolving list of things I have worked on personally, academically or professionally.

In the Cyber 9/12 Strategy Challenge, teams are faced with a scenario simulating a large-scale cyber incident. Teams must develop an appropriate policy response and present it in front of a panel of experts.

In the 2020 Geneva challenge, the five ETH teams took the top five places. Among this highly talented, both competitive yet incredibly supportive group of students, my team PromETHeus scored highest.

In the process of the challenge, I developed a detailed understanding of the different national, international and supranational entities (both public and private), their powers and responsibilities, their governance structures, and how they can cooperate to collectively respond to a crisis. We worked together as an interdisciplinary team, under tough deadline constraints and were able to develop, present and defend a convincing policy recommendation.

Since summer 2019, I have the pleasure to work part-time at Ubique. I enjoy it a lot - not just because I get to work on real projects (and not just coursework). Ubique is also a stone’s throw away from ETH, so whenever I need a break from my full-time studies, it is only a Polybahn-ride away.

My work includes minor features and bug fixes for projects such as AlertSwiss and SwissCovid. The pieces of work that I am most proud of and learnt the most from are:

Together with five other students - and the support of the Swiss Supercomputing Center and various sponsors - I designed, built and operated a four-node supercomputer.

We successfully competed in the two Student Cluster Competitions during ISC19 in Frankfurt and SC19 in Denver. Most notably at ISC19, we placed 3rd overall and won the Highest Linpack award.

The ultramarathon Spartathlon is quite a journey for both the athletes themselves but also for their supporters and friends at home, as well as the volunteers in Greece.

My rewrite of the old app (which as of September 2020 has not been updated since 2016) includes all existing features while also adding a ton of new ones: dark mode (remember, the race goes through the night!), pinning favourite athletes and most importantly the race schedule (for which I wrote my own backend).

The app is currently UNOFFICIAL. I have been in contact with the Head of IT of the International Spartathlon Association ISA but unfortunately board decisions can be rather slow. Nevertheless the app has already been in use by my own supporter during the 2019 race and I have had very positive feedback.

You are at home and want to follow your beloved ones as they are slowly progressing from Athens to Sparta. Normally you would regularly check the website to see if they have already passed the next checkpoint (Are they there yet? Are they still in the race?).

With my bot, you get simple Threema messages when a runner you follow passes a checkpoint. 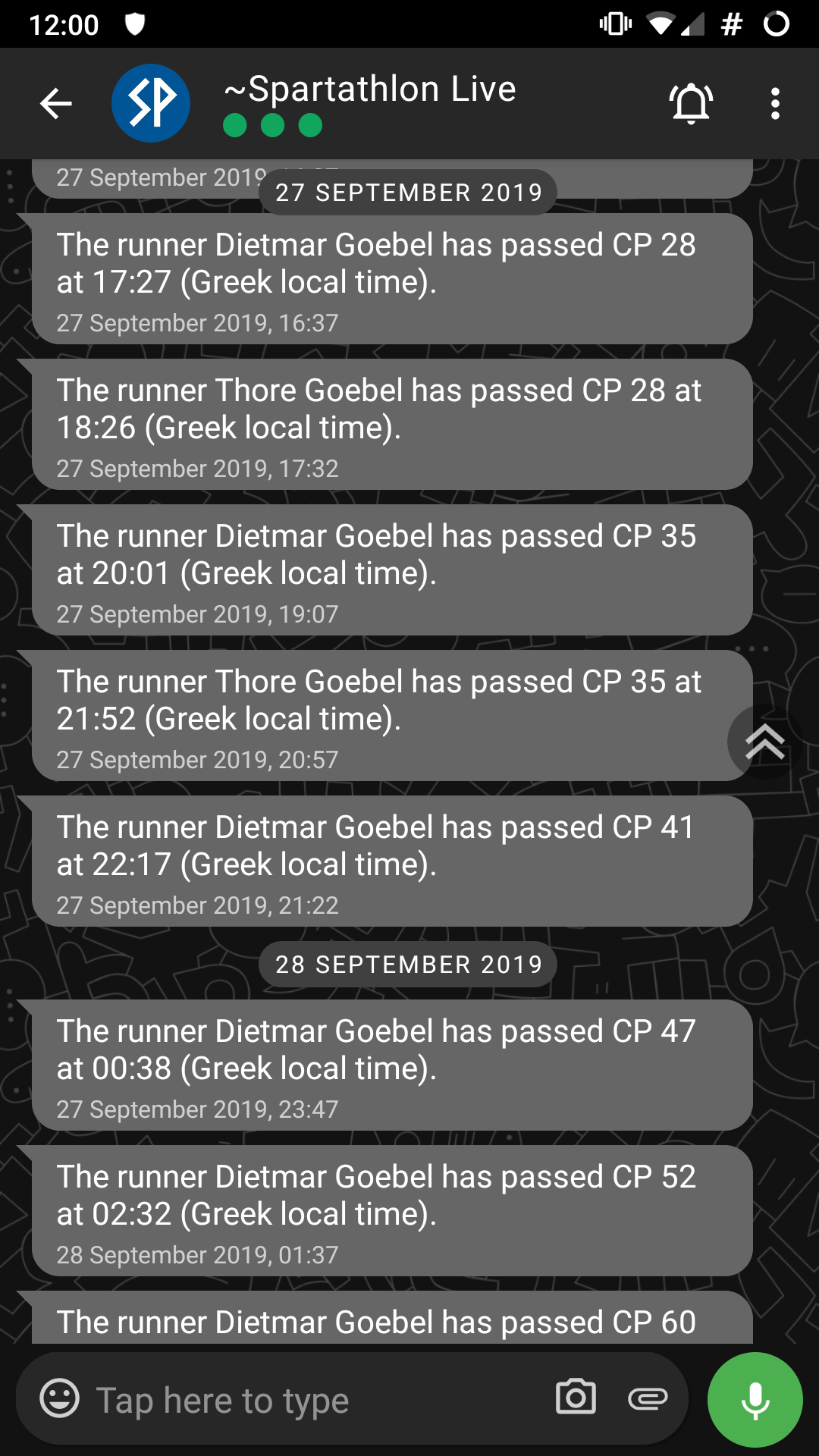